Friday 26th June saw the return of BNI’s Facebook Live series, and we were delighted to kick it off with a group discussion about referral giving.

Charlie Lawson was joined by Executive Director Greg Davies and March’s top referral giver, Richard Bould, of Prince Imperial chapter in Chislehurst. Richard is the owner of Jennings and Barrett, a property management company, based in Kent. He has been a member of BNI for 13 years and has recently achieved the incredible goal of having passed over £2m of business to fellow members! Other staff members of Jennings and Barrett have passed an additional £1m so we just had to know what the secret was. 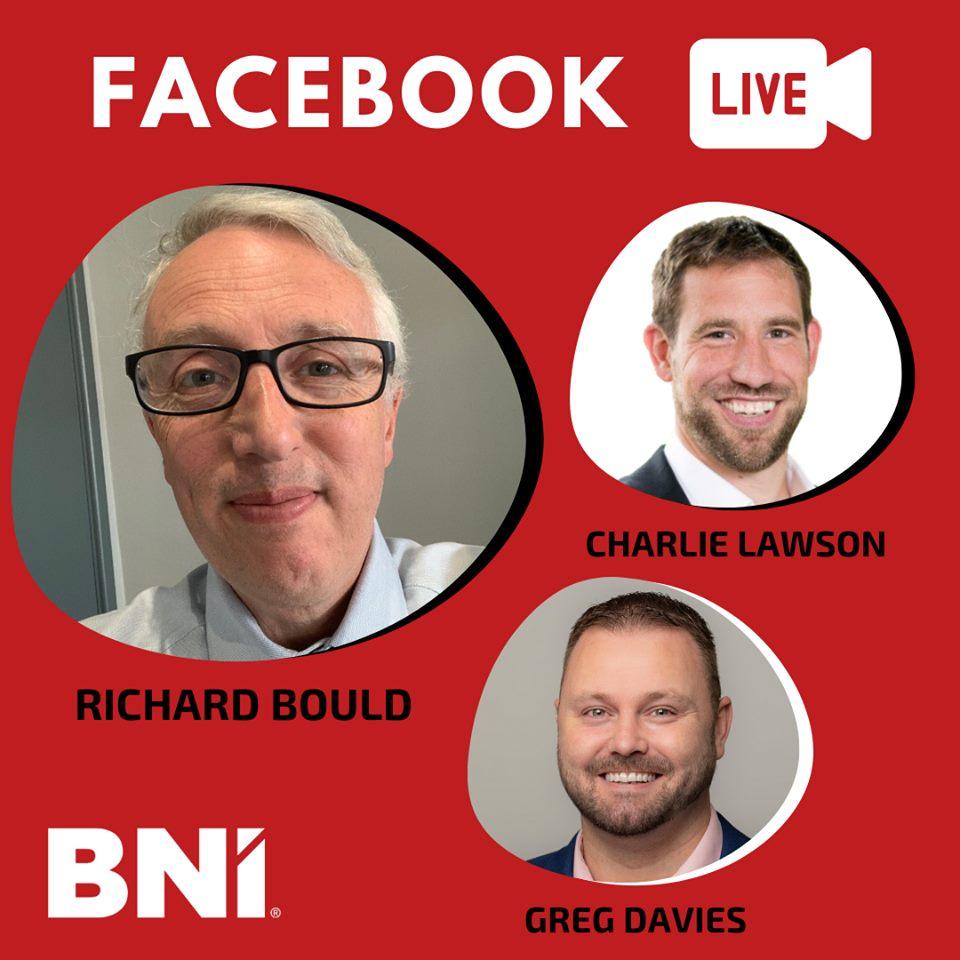 Richard originally joined BNI because two colleagues invited him to a meeting. Despite being sceptical that it was ‘a load of American mumbo jumbo’, he went along and really enjoyed it.

Having signed up, he readily admits that he didn’t fully immerse himself or ‘get’ BNI in the early stages. He didn’t partake in 1-2-1s or the social gatherings and, whilst he gave some business out in his first year, he only generated £80 income… though he recognises now that this was because of his approach in those early days.

In his own words he was ‘an absolutely useless member’!

Richard learnt a lot from that first year and soon understood how Givers Gain really works as a philosophy.

By engaging more with fellow members, Richard began to give out more business and receive more too, with his first big inbound referral coming after 14 months – a client that was worth £15k per year for over 12 years! By engaging with people, catching up with lots of BNI colleagues and doing a good job for them the opportunities grew for him but also gave him the opportunity to refer others.

Whilst this session with Richard focused on how he came to be able to pass so many referrals, his story is a perfect testament to the idea of Givers Gain and the ‘secret’ to BNI success. It is clear from listening to Richard that his rise to being one of the top referrers in the UK & Ireland is not chance and it is not one sided – it is, in fact, a spiral of success.

The more Richard got to know his fellow members, the more he would trust them and could refer them work. The more he referred business to them, the more they were eager to refer work to him… and so on.

Of course, it isn’t a secret how this happens, and Richard makes it very clear throughout this discussion that it’s about getting to know people, about building relationships and sharing challenges and successes.

He does acknowledge that he is aided in being able to give up to 35 referrals each week due to the business he is in but, at the same time, he wouldn’t want to do that if he didn’t have such strong relationships with his BNI colleagues.

Of course, BNI is more than just passing business and receiving referrals. There are great opportunities to learn and develop your own skill set and Richard says that, through his time as a member, his greatest development area has been professionalism. Professionalism underscores how he operates and how his company delivers its services.

It is also the cornerstone of giving and receiving referrals as a BNI member because, without professionalism, trust is absent. Are you going to refer someone who you don’t believe in? Do you want to put your reputation on the line for someone who doesn’t demonstrate professionalism?

Richard shares some invaluable lessons for us all to remember - as useful for longstanding members experiencing a challenging time, as for brand new members wondering if they can make BNI work for them.

It took a while for Richard to uncover the key to BNI success but by persisting, increasing his involvement and building strong relationships he got to know his colleagues, trusted them and passed them business. They wanted to help him, got to know him better and so passed referrals back…

So, not only has Richard passed over £2m of business but he has also thanked members for vast sums in this time.